What the census tells us about Australia’s home ownership

On the surface, the latest census tells us home ownership has changed little over the past five years.

Between the 2016 census and this census in 2021, the share of Australians owning their homes remained steady at about 66%. 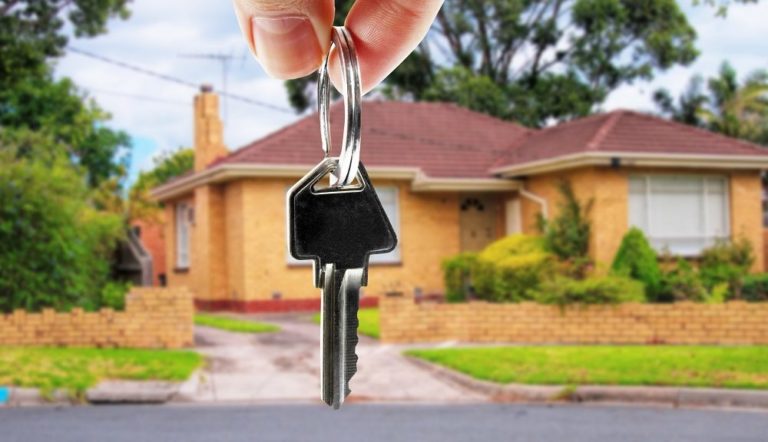 The proportion of renting also changed little, climbing from 30% to 30.6%.

The proportion of renting is four percentage points higher.

Most of the shift occurred between 2001 and 2006, which were the early years of the sustained home price boom.

As prices climbed, more Australians rented, and owner-occupiers took on larger mortgages that took longer to pay off. 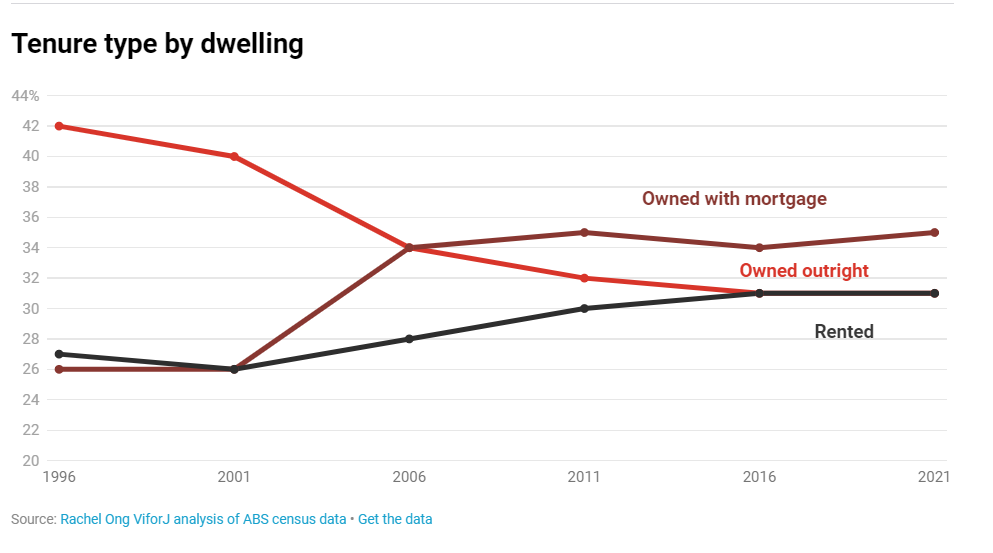 In younger age groups, the proportion of owning a home has dived.

This is part of a long-term decline that began in 1981. 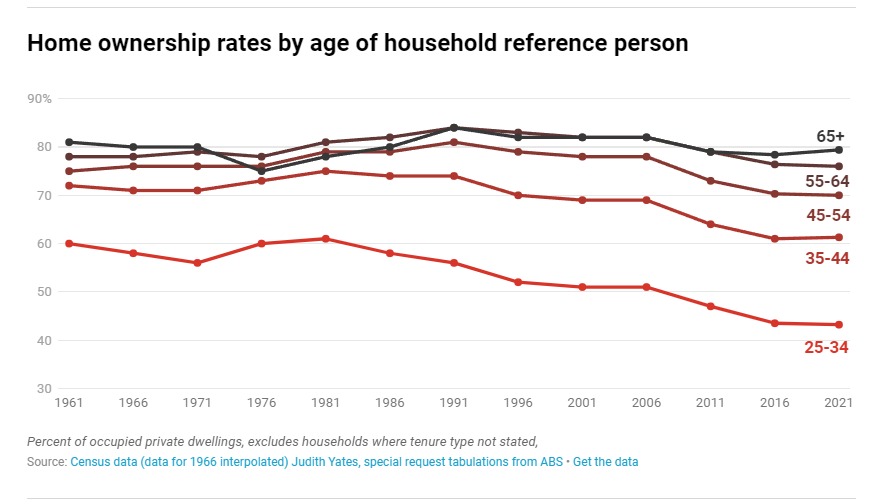 A prepared by the Australian Bureau of Statistics shows homeownership rates among Australians aged 65+ ticked up from 78.4% to 79.4% between 2016 and 2021 after sliding in the previous two censuses.

The downward trend in homeownership among the young and the upward trend in mortgaged rather than outright ownership show no signs of reversing, despite significant spending on first homebuyer subsidies and guarantees.

It depends on where you live

The changes have not been uniform throughout the country.

In South Australia, Western Australia and Tasmania the proportion of households renting has barely changed since 1996.

In the Northern Territory and Australian Capital Territory, it has slipped.

But in Victoria, the proportion of households renting has jumped 3%, in NSW it has jumped 4%, and in Queensland 3%. 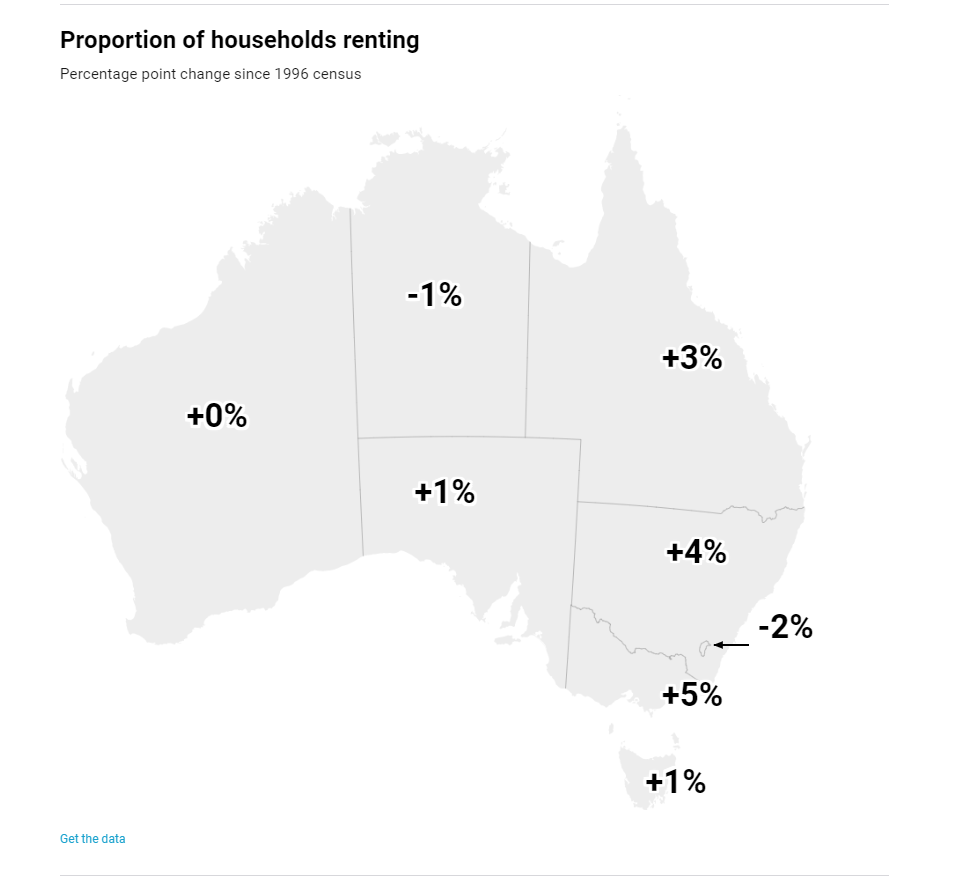 The proportion of households owning outright unmortgaged has fallen 10-12% in Queensland, Victoria and NSW, 8% in South Australia and Western Australia, 6% in Tasmania, 3% in the ACT, and is unchanged in the Northern Territory.

Back in 1996, Victoria had the highest share of outright ownership at 44%. 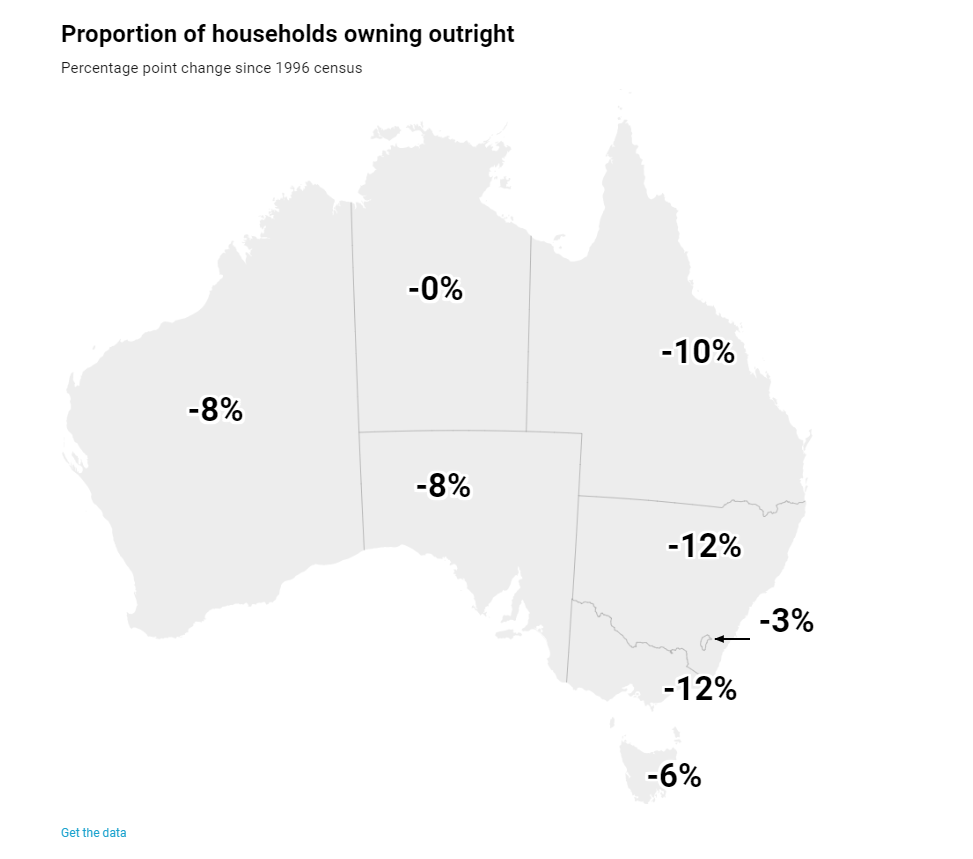 A shift towards apartments

The proportion of households occupying freestanding houses fell from 82% to 72% between 1996 and 2021.

The proportion housed in apartments climbed from 8% to 14%

The shift has been more evident among owners than renters, suggesting buyers have to make greater sacrifices to obtain a home than they used to.

A shift towards agents

Whereas in 2006 half of all rental properties were rented through agents, by 2021 it was two-thirds.

Over the same 15 years, the share of rental homes rented from a state or territory housing authority slid from 15% to 10%.

The share of rental housing provided by the community sector changed little. 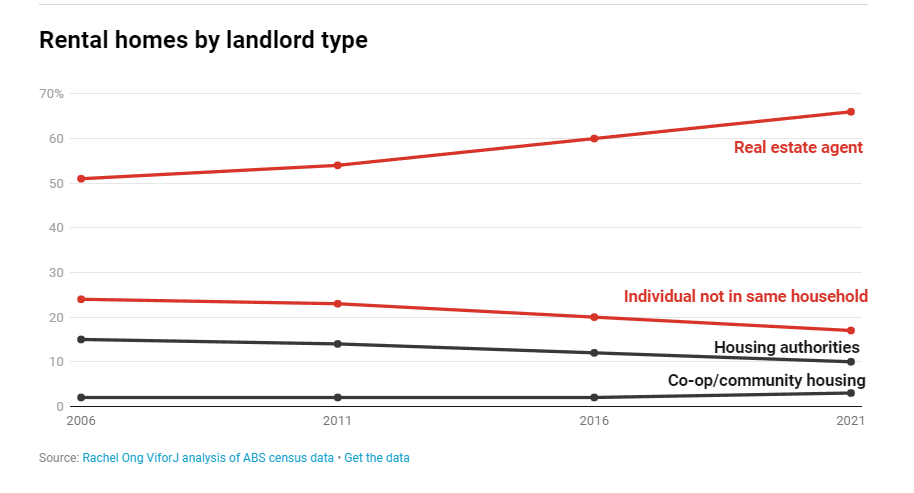 The census mainly provides population-wide snapshots, rather than tracing people through time.

This makes it hard to tell the extent to which people are moving out of home ownership and then back into it (and sometimes out of it again), along the lines suggested by my own research using data from the Household, Income and Labour Dynamics in Australia (HILDA) survey.

Nor does it provide much insight into whether the growing numbers of Australians having to rent will eventually own (mortgaged) homes. 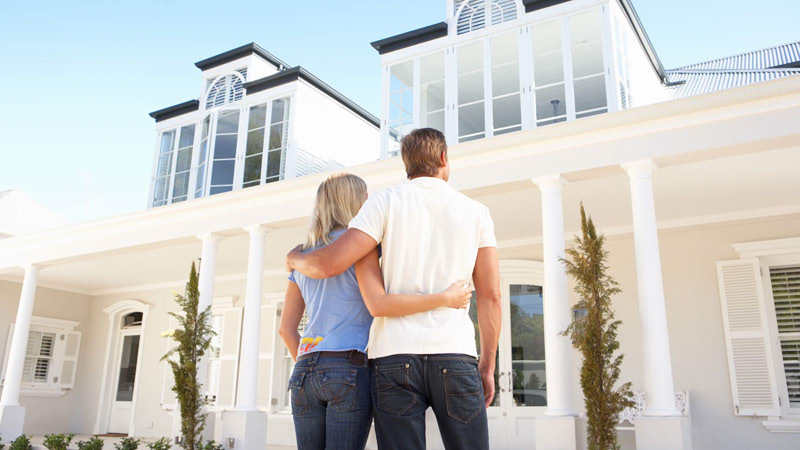 Research by myself and colleagues in Britain and United States points to a “catch-up” in which Americans and Australians denied home ownership when young attain it later in life.

One thing the census puts beyond doubt is that more of us are renting and more of us are mortgaged rather than owning outright compared with 20 years ago.

This article is republished from The Conversation under a Creative Commons license. Read the original article here.

About Guest Expert
Apart from our regular team of experts, we frequently publish commentary from guest contributors who are authorities in their field.