What Is the Origin of the Christmas Tree? 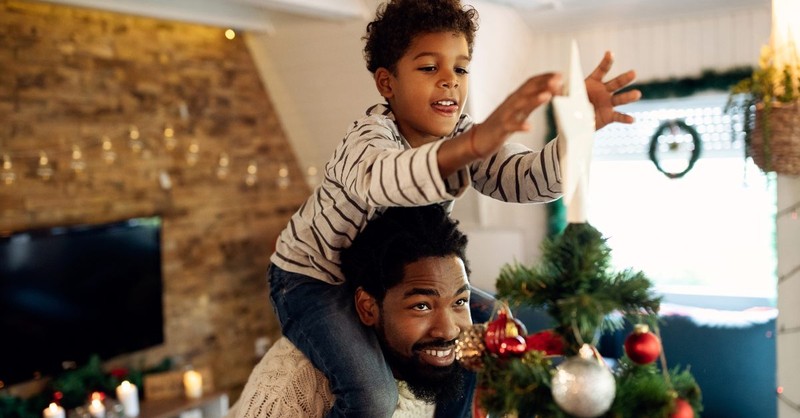 It’s said that the symbolic uses of evergreen trees can be traced back to ancient Egypt and Rome and that the German tradition of candle-lit trees was first introduced to America in the 19th century. It is fascinating to learn the history of the Christmas tree, from the first winter solstice to the present-day — with the most famous modern-day Christmas tree in Rockefeller Center in New York City.

What Is the Origin of Christmas Trees?

Before Christianity, people paid special attention to green plants and trees in the winter. While modern people decorate their homes with pine, spruce, and fir trees during the holiday season, people in the ancient world hung evergreen boughs over doors and windows. Evergreen trees were believed to keep witches, ghosts, and evil spirits away in many countries.

The longest day and shortest night of the year fall on December 21 or December 22 in the Northern Hemisphere. People used to believe that the sun was a god, and that winter came every year because he became ill and lost his strength (Ibid.).

In ancient times, the solstice meant that the sun god would finally get well. They thought the evergreen boughs reminded him of all the green plants that would grow again when the sun god was strong, and summer came back.

The ancient Egyptians worshiped a god named Ra, who had the head of a hawk and wore the sun as a blazing disk on his head. When Ra was recovering from his illness, at the solstice, the Egyptians threw palm rushes in their homes, symbolizing life’s triumph over death (Ibid.).

The early Romans celebrated Saturnalia, a festival of the solstice that celebrated the agricultural god Saturn. Farms and orchards were going to be green and fruitful as soon as the solstice hit. The Buddhists celebrated by decorating their temples and homes with evergreen boughs.

As a symbol of eternal life, the ancient Celt priests, known as the Druids from the now present-day United Kingdom, decorated their temples with evergreen boughs. As far as the Vikings were concerned, evergreens were a special gift from Balder, the sun god (Ibid.).

In Germany, devout Christians decorated trees in their homes during the 16th century, which is credited with starting the Christmas tree tradition we know today. When wood became hard to find, some people built Christmas pyramids of wood and decorated them with evergreens and candles.

Many people believe Martin Luther was the first to add candles to the tree. As he was walking home one winter night to write a sermon, he was awed by the twinkling stars in the evergreens. A tree was erected in the main room and wired with lighted candles so he could recreate the scene for his family (Ibid.).

What Is the Origin of Christmas Trees in America?

Christmas trees were an odd commodity for most Americans in the 19th century. In the 1830s, German settlers in Pennsylvania had the first record of displaying one, though trees had been a tradition in many German homes before then.

There was a community of trees in the Pennsylvania German settlements as early as 1747. Even after the 1840s, Christmas trees were thought of as pagan symbols.

Comparatively, the Christmas tree was adopted late in America, as were many other Christmas customs. Christmas was sacred to New England Puritans. William Bradford, the second governor of the pilgrims, wrote that he did his best to stamp out “pagan mockery” of the observance, he even penalized anyone who did it frivolously (Ibid.).

In 1659, the General Court of Massachusetts issued a law making observing Christmas a penalty offense. People were fined for hanging Christmas decorations.

Oliver Cromwell preached against “the heathen traditions” of Christmas carols, decorated trees, and any expression of joy that desecrated “that sacred event.” However, in the 19th century, German and Irish immigrants undermined the Puritan legacy (Ibid).

Queen Victoria and her husband Prince Albert, who was from Germany, were pictured with their children around a Christmas tree in 1846 in the Illustrated London News. The Christmas tree was here.

It was Victoria’s first reign, and everything she did was immediately fashionable, not only in Britain but among the fashion-conscious East Coast American society as well.

American Christmas trees were usually decorated with homemade ornaments until the early 20th century, while German-American trees were decorated with apples, nuts, and marzipan cookies. In addition to popcorn, berries, and nuts were mixed in.

Rockefeller Center planted its first tree in 1931. Construction workers placed a small, unadorned tree in the center of the construction site. A second tree was placed there two years later, this time with lights. Currently, the Rockefeller Center tree has over 25,000 lights.

What Does This Mean?

The Christmas tree is a wonderful and historic tradition that we don our homes with every Christmas to fill us with spirit and to lay our gifts underneath. However, it is the birth of our Lord and Savior, Jesus Christ on the very first Christmas that we celebrate.

So Joseph also went up from the town of Nazareth in Galilee to Judea, to Bethlehem the town of David, because he belonged to the house and line of David. He went there to register with Mary, who was pledged to be married to him and was expecting a child. While they were there, the time came for the baby to be born, and she gave birth to her firstborn, a son. She wrapped him in cloths and placed him in a manger, because there was no guest room available for them (Luke 2:4-7).

We wish you a very Merry Christmas and a Happy New Year!

Is the Origin of Christmas Truly Rooted in Pagan Traditions?

Is it Important to Know Jesus’ Family Tree at Christmas?

What Is the Origin of Beloved Christmas Traditions?

What Is the Significance of Trees in the Bible? Why Did Jesus Die on a Tree?

What Is the Meaning of Christmas?

Glory Dy has been a content creator for more than 10 years. She lives in a quiet suburb with her family and four cats.