The Silver Edge to Inflation Hedging 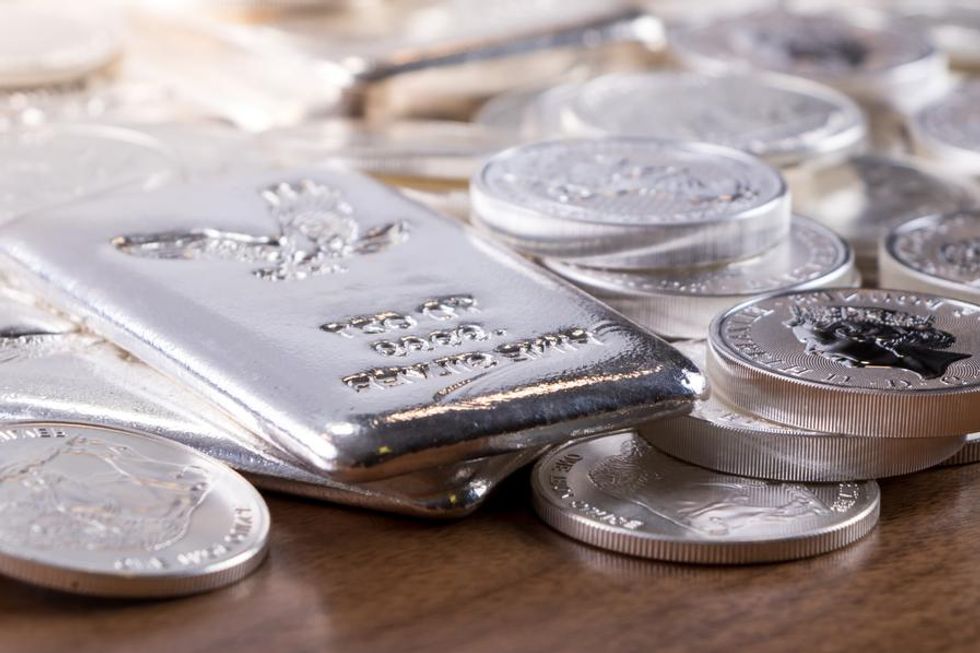 There are bright sides to the dark cloud of inflation, and for some investors one of them may be silver.

Silver is generally seen as gold’s sister metal — not as valuable, and not nearly as ubiquitous in terms of demand, but that doesn’t mean it should be counted out of a diverse portfolio.

Because of its precious metal status, silver can be a decent hedge against inflation as its worth is derived differently from paper currencies. Unlike paper currencies, silver cannot be printed, and has a limited supply. When the US dollar weakens (either because of increased money supply or inflation), the silver price tends to rise.

This limited supply posed a problem to the US Department of the Treasury back in the 1950s, when coinage was still made from silver. As the US recovered post-war, demand for industrial silver and coinage both boomed, forcing the treasury to sell its silver holdings to keep the price at its monetary value. If it hadn’t done so, individuals would have had the incentive to melt silver and sell it for a higher price than its monetary value.

Silver is no longer used for general coinage, but it still has great use from an investment perspective. And aside from being a precious metal (and thus a store of wealth), silver has many industrial applications: in batteries, smartphones, glass coatings and water filtration, to name just a few. The industrial use of silver accounted for nearly half of silver demand in 2020 (up 8 percent from the year before,) according to the Silver Institute.

The silver market has seen volatility over the years. Silver hit its highest price (US$48.70 per ounce) in the 1970s on the back of a confluence of factors, including perceptions of limited supply and high inflation. Prices then declined steady until the 2000s, when they began a slow uptick, nearly reaching the US$50 level again in 2011. Another steady decline followed until mid-2020, when fears over surging inflation (on the back of pandemic stimulus) and renewed economic output (as economies opened) once again drove prices up.

Inflation and silver: Understanding the correlation

The first is that silver tends to move in tandem with gold: when the price of gold rises, so too does the price of silver. Gold and inflation have a stronger correlation, and thus silver benefits from this once-removed relationship.

Secondly, because of silver’s greater ties to industry (compared to gold, which saw just 8 percent usage in technology in 2020), when demand for goods and services outraces supply, and inflation hits and prices rise, the price of silver tends to increase in tandem. For example, the price of silver jumped 70 percent between May 2020 and May 2021 as economies around the world reopened after a year of muted growth. In fact, Ole Hanson, head of Commodity Strategy at Saxo Bank, told CNBC that industrial demand was the “main reason” that silver outperformed gold in that time period. Furthermore, US inflation was up 5 percent in that time.

Thirdly — and this is important from a gold vs. silver perspective — silver is much more affordable than gold, and so its price tends to move much faster, affording a far greater return on investment. From May 2020 to May 2021, gold only rose 6.4 percent compared to silver’s 70 percent. As Jodie Gunzberg, managing director and chief investment strategist at Morgan Stanley Wealth Management Institutional, told US News, “It takes a much smaller investment in silver than gold to hedge against inflation.”

And finally, as the world attempts to switch to a green economy, silver’s industrial demand is only set to increase. CRU International’s report “The Role of Silver in the Green Revolution” highlights three key industries where silver is critical: solar energy, nuclear energy and appliance charging. All three industries are pegged as set to grow in the race for net-zero emissions, locking in silver demand for the near future.

If you’re looking for ways to invest in silver, give this guide a read.

The white metal is extremely volatile — far more volatile than gold, other commodities and even the S&P 500 (INDEXSP:.INX). This is because of the multiple use categories for silver, where industrial demand coupled with investment demand can drive prices up or down quickly.

Another reason — and this is true for gold as well — is that monetary policy action can reduce the investment glamor of silver. As inflation persists, interest rates will increase, pulling investment favor back to the US dollar and strengthening it, likely to the detriment of precious metals.

Finally, silver’s returns aren’t a sure bet. Before its surge in 2021, the silver price had been on a steady decline since 2011. Comparing its action with the robust returns of the S&P 500 and real estate makes it an unlikely candidate to dethrone other favorites in the investment space.

Some market watchers say that silver is ready for another breakthrough, citing similar patterns from 2004 to 2006, when silver began to skyrocket. From a macro perspective, as the world economy recovers and the green economy becomes increasingly important, the fundamentals are in place for strong market support.

From an inflation hedge perspective, other commodities (oil, gold) and other categories (real estate) can offer better returns and more stability. However, there is historical precedent that when silver starts a bull run, investors can benefit deeply and significantly add to their portfolios, instead of just as an inflation hedge.

Securities Disclosure: I, Pallavi Rao, hold no direct investment interest in any company mentioned in this article.

PrevPreviousSubleasing Airbnb: The Definitive Guide
Next30 Fun (Not Cheesy) Ice Breaker Games Your Employees Will EnjoyNext