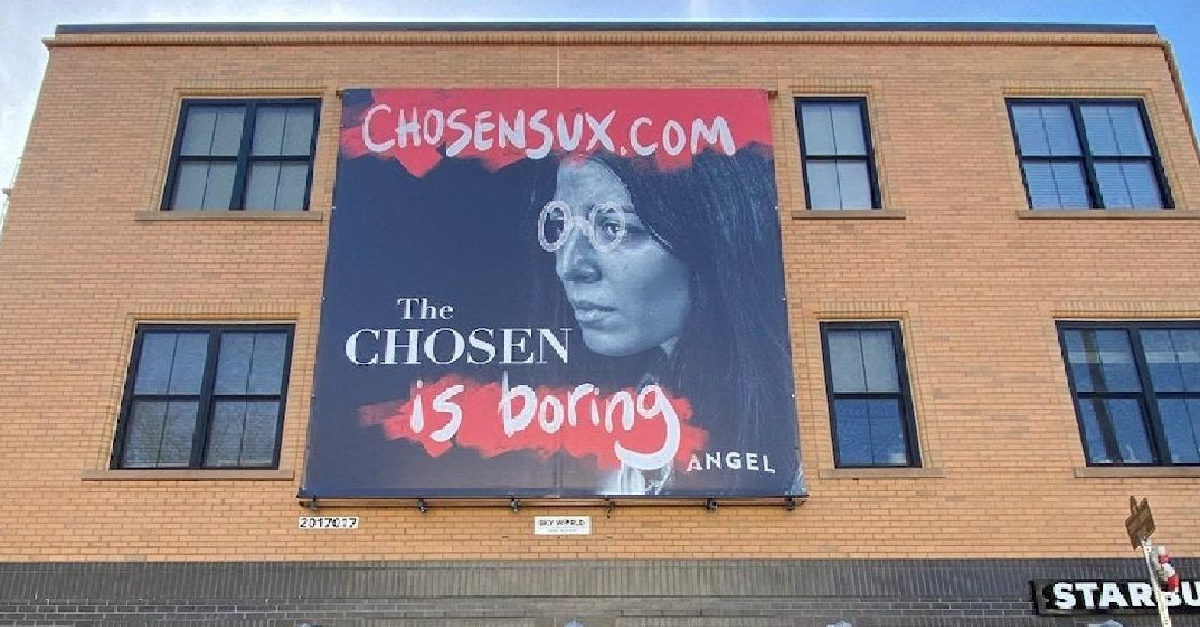 The director of the hit faith-based series The Chosen is apologizing for not giving fans advance warning about an advertising campaign that appears to show Chosen billboards having been defaced.

The billboard campaign was sponsored by the company behind the series, Angel Studios, and seemingly shows white and red spray paint spoiling what was a pristine sign. For example, a Chosen billboard in Boston, Mass, was changed to read “ChosenSux.com” and “The Chosen Is Boring,” with both phrases apparently written by a vandal.

The problem? Some fans were upset, believing the billboards of their favorite TV series had actually been damaged.

Director Dallas Jenkins on Wednesday apologized to fans, explaining that the campaign is targeting people who have never watched the series.

“I genuinely ask for your forgiveness,” Jenkins said during a Facebook livestream. “… We should have told you from the beginning of what we were planning to do and that the billboards being defaced were ours.”

Jenkins also explained the goals of the campaign. The website at the heart of the campaign – TheChosenIsNotGood.com – includes a satirical video of “Satan” instructing citizens of “Hell” not to watch The Chosen.

Jenkins and executive producer Derral Eves, who also spoke during the Facebook livestream, acknowledged that some fans may not embrace the campaign. A news release said the campaign was “reminiscent of C.S. Lewis’ Screwtape Letters.” Jenkins compared the campaign to humorous Chick-fil-A billboards that depict cows encouraging people to eat chicken.

He said the series is targeting non-Christians and the unchurched.

“This is part of our attempt – our passion – to reach a billion people with the authentic Jesus,” Jenkins said. “And to do that, we have to reach new audiences – people who’ve been skeptical of the show, people who haven’t heard about the show, people who are going to now be intrigued and interested in. And to that extent, we’re already seeing a tremendous response from some people who previously were not wanting to watch the show.”

Eves told of a father-son duo who watched the video. The father said the advertising campaign was a bad idea for Bible Belt audiences. The son, though, loved the video.

“His teenage son came up and … started watching the ad and was laughing at the jokes and was engaged with it. And [the son] says, ‘Dad, could we actually download this app? This actually sounds pretty cool.'”

The father and son downloaded The Chosen app and began bingeing the episodes, Eves said.

It’s “really important that we pull” younger generations in “to see an authentic Jesus,” he added.

“And this marketing strategy – this reverse psychology – is one of the most effective ways to pull that Generation Z in to grab their attention,” Eves said.

Video courtesy: ©The Chosen Is Not Good YouTube channel