Annual mined gold production has hit a wall in recent years. Coming in at 3,667 tonnes in 2018, output has largely plateaued since then, impacting overall supply of the yellow metal.

Although 2021 brought some recovery in mine production following the pandemic-related shutdowns seen in 2020, total gold supply fell to 4,666 tonnes, the lowest level since 2017.

Mined output saw a 2 percent year-over-year (y-o-y) increase in 2021, but this small rise was outweighed by an 11 percent decline from the recycling segment. The general downtrend in mine output, combined with lower recycling, has prompted some to speculate about the scarcity of future supply.

What do experts see coming for gold supply? The Investing News Network asked experts for their thoughts.

As mentioned, 2021 brought a 2 percent y-o-y increase in mined gold production. However, not all areas saw growth, and in some cases COVID-19-related challenges were replaced by operational issues.

There was also an 8 percent y-o-y drop out of Burkina Faso, and a 7 percent y-o-y decline for Australia. Elsewhere, a fire at Kinross Gold’s (TSX:K,NYSE:KGC) milling operations at its Tasiast mine in Mauritania caused a temporary suspension in operations, which led to a 58 percent y-o-y production reduction for the country.

In contrast, Canada’s annual output climbed by 19 tonnes on the back of expansions and a recovery from 2020. Mexico and South Africa also saw upticks in 2021, adding 14 tonnes and 13 tonnes y-o-y, respectively.

This growth is on trend, according to Adam Webb, director of mine supply at Metals Focus. “We expect mined gold supply to continue growing over the next few years, driven by increased output from existing operations alongside new projects coming online, particularly in the Americas,” he said.

It’s worth noting that even though gold has registered two new record highs in the last two years (2020, 2022), gold producers haven’t benefited as much as they might have, with some upside being offset by rising operational costs. This problem was further compounded by 2021’s lower gold price, global inflation and higher input costs.

In 2021, all-in sustaining costs rose 8 percent y-o-y to an average of US$1,058 per ounce. This rise is expected to continue this year, primarily driven by surging prices for energy.

As mine output plateaus, is overall gold supply in jeopardy?

Despite positive expectations for future gold mine supply, recent flatter levels have left some wondering if overall gold supply will be able to hold up to demand — are these concerns valid?

Experts at both Metals Focus and the World Gold Council believe that global reserves and the insulated nature of the gold market will prevent any significant supply challenges.

“There is plenty of gold identified in current reserves and resources to sustain production at current levels for many years to come,” said Webb.

“At the end of 2020, identified reserves were capable of supporting current production levels for 14 years, and identified resources were potentially able to support an additional 31 years of global production.”

These numbers also do not account for additional resource potential identified through exploration. 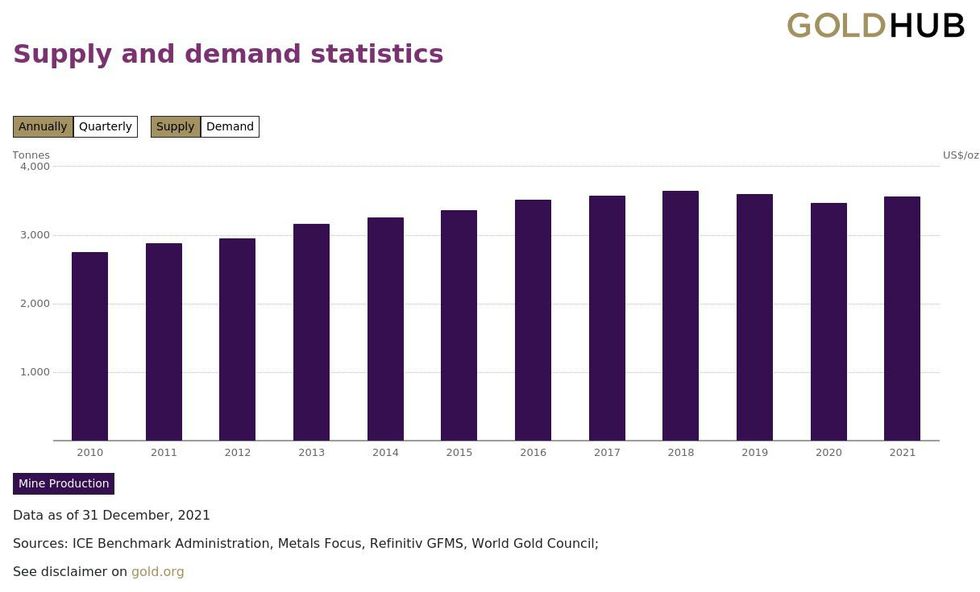 Chart via the World Gold Council.

For Krishan Gopaul, senior analyst, EMEA at the World Gold Council, like all resources there is some scarcity to gold as a commodity, although it is not as impacted by production declines as other metals and minerals.

“Gold mine production typically contributes 3,500 tonnes (75 percent of annual supply), but the remainder comes from recycling,” said Gopaul. “In addition, gold mine production is geographically diverse and, as such, less subject to the kind of supply shocks that other commodities tend to experience.”

Because of this, gold supply is far less volatile compared to virtually all other commodities, he noted. “Thus, while a substantial reduction in mine production could result in higher prices, gold would not likely experience the same level of supply-driven price dislocation that other markets, such as oil or base metals, could see.”

Despite the relatively steady nature of gold supply, one factor that could impact future production rates is the advancement of autonomy and technology related to mining and mineral recovery.

“It could also lower operating costs, thus making lower-grade material economic to extract, which would increase reserves and mine lives,” explained Webb.

There have also been advances in the ability to reprocess tailings and waste to capture gold that was not extracted initially. Reprocessing underscores the importance of the environmental stewardship and sustainability themes that are becoming more prevalent in the sector each year.

“As with any other industry, technological advancements have the potential to bring down some of the costs of mining, which may lead to increased levels of output,” Gopaul explained.

“However,” he continued, “large-scale gold mining is capital intensive, already employing high levels of mechanization and expertise to mine vast areas both on and below the surface.”

The analyst at the World Gold Council went on to point out, “In addition, there is an increased focus on sustainability. As such, gold mine production has only increased at a rate of around 2 percent per year over the past decade, highlighting some of the natural limitations of gold extraction.”