Gold has earned a reputation as a stable commodity that can help investors weather even the most intense financial storms. The yellow metal broke its all-time high by reaching US$2,074.60 in March 2022, amid the Russia-Ukraine conflict, with its previous high taking place as the COVID-19 pandemic shook the world in 2020. Some investors say that everyone should have a bit of gold in their portfolio as a safe store of value during global turmoil. While some investors opt for commodities markets, others seek gains by investing in promising gold mining companies.

Canada is a mining-friendly jurisdiction and ranks within the top five global producers of gold. Northern Canada is a hot spot for gold mining companies due to the famous Abitibi greenstone belt, which straddles the border of Ontario and Quebec. The popularity of this region has given birth to a robust infrastructure that supports mining operations. Golden opportunities in Canada reach further north into Nunavut, which has geological similarities to some of the largest sources of gold in the world. Mining and exploration companies with assets in these regions are certainly worth a paying attention to.

New Break Resources Ltd. (“New Break”) is a private Canadian exploration and development mining company that has assembled a leadership team of managers with direct experience in gold mining, geology, and corporate finance. The Company’s board of directors adds additional expertise in geology and corporate management. A gold-focused portfolio illustrates the Company’s commitment to the precious metal. New Break is currently in the process of going public, having submitted a preliminary prospectus to the Ontario Securities Commission in early May 2022 and expects to list on the Canadian Securities Exchange in the coming weeks. New Break currently has 39,030,750 shares outstanding.

New Break’s flagship Moray Project, is situated in the Abitibi greenstone belt on a splay off of the Cadillac-Larder Lake fault zone, with access to excellent infrastructure, located 49 km south of Timmins, Ontario and 32 km northwest of the Young-Davidson gold mine, operated by Alamos Gold Inc. (TSX:AGI; NYSE:AGI). In total, the Abitibi gold belt has produced over 190 million ounces of gold since 1901 and currently features over 20 gold deposits containing over 3 million ounces of gold in each deposit.

Next to the Abitibi, large gold-bearing greenstone belts in the Kivalliq Region of Nunavut in Canada’s north, offer unparalleled opportunity for mineral discovery and lies significantly underexplored. The greenstone belts of Kivalliq Region are home to the Meliadine and Meadowbank gold mines, operated by one of the world’s largest gold mining companies, Agnico Eagle Gold Mines (TSX:AEM; NYSE:AEM), with combined 2021 production from the two mines 716,495 ounces of gold.

It is because of this incredible potential, that New Break has assembled an impressive portfolio f four gold projects in Kivalliq Region. In October 2021, New Break entered into an Inuit Owned Lands Mineral Exploration Agreement (“MEA”) for exclusive mineral rights on 9,415 hectare Sundog Project. Sundog was discovered in the mid 1980’s by famed Canadian prospector Ken Reading who also discovered the Meliadine deposit. Sundog is characterized by numerous instances of visible gold near surface and has never been drilled. The Company’s Esker and Noomut claims, along with claims comprising the Sy and Angikuni Lake projects, were staked in 2021 using the newly implemented Nunavut Map Selection system for online staking. The Esker claim has seen 3,220 metres of historical drilling in 18 drillholes with some truly spectacular assay results, as described below.

The Company’s management team has decades of directly relevant experience. President and CEO, Michael Farrant has over 25 years’ of leadership experience in the gold mining industry, including the successful completion of multiple acquisitions, following a decade of senior financial roles with Barrick Gold Corporation (TSX:ABX; NYSE:GOLD) and Kinross Gold Corporation (TSX:K; NYSE:KGC). Bill Love, Vice president, Exploration, has over 35 years’ experience in mineral exploration in Canada, including being part of the discovery team for the world-class Hemlo deposit in Ontario, Canada’s third largest gold deposit. Jim O’Neill, CFO, brings three decades of experience in corporate finance and multinational businesses operating in Canada. 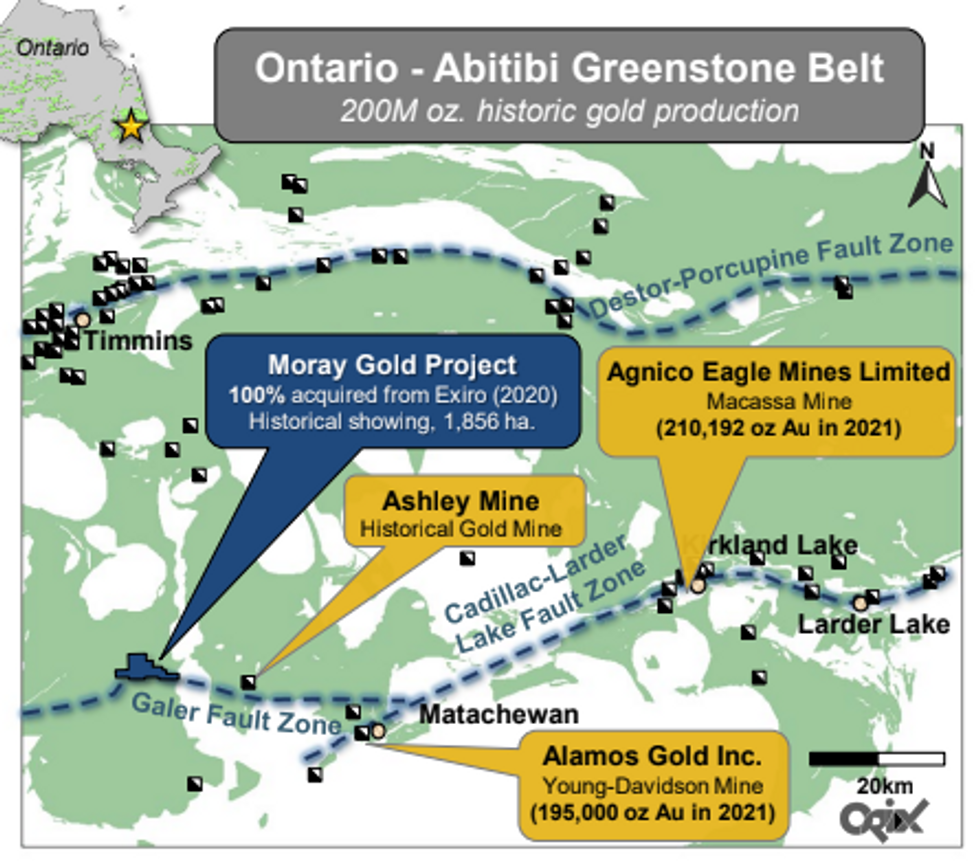 Located only 49 km from Timmins, ON, the 100% owned gold and critical metals asset comprises 14 mining claims encompassing 1,856 hectares. The project rests within the world-class Abitibi greenstone belt that runs along the border of Ontario and Quebec. Fully permitted, New Break plans to complete a $431,000 phase 1 exploration program in Q2 and Q3 2022 comprised of VLF survey work, mechanical stripping, sampling and geological mapping, till sampling and structural mapping and interpretation. 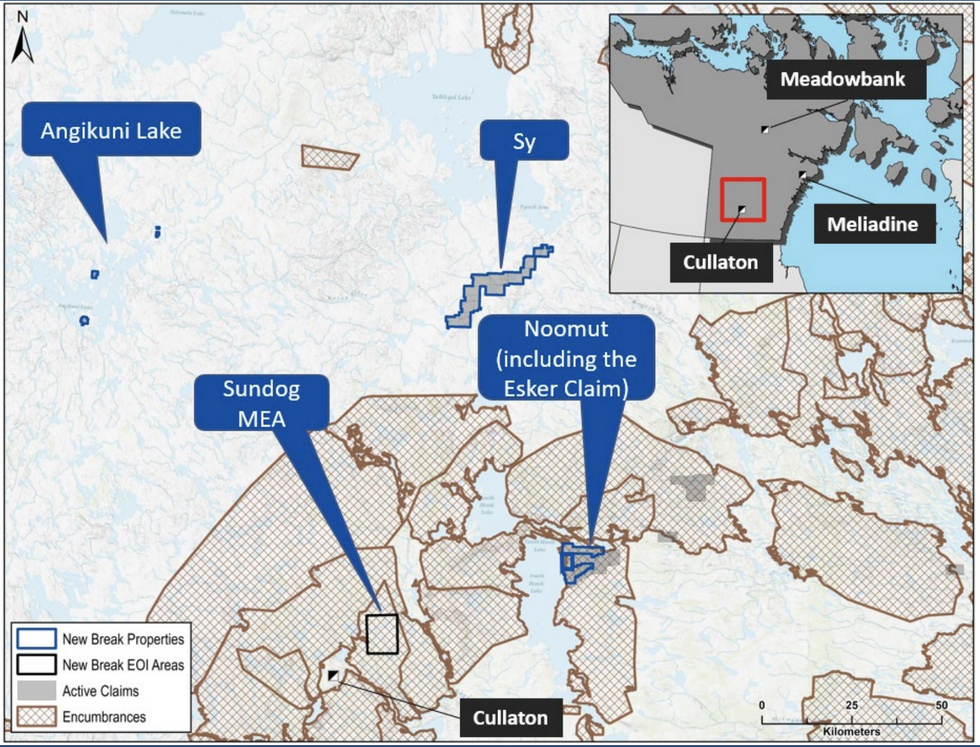 The Sundog Project covers 9,415 hectares of an underexplored area in Kivalliq Region, Nunavut on Inuit Owned Land approximately 16 km northeast of the past-producing Cullaton Lake gold mine. Historical exploration results revealed the presence of high-grade gold mineralization. Sundog was prospected in 1986 by Ken Reading and despite there being numerous instances of visible gold near surface, the property has never been drilled. In June 2021, New Break purchased all of Ken Reading’s historical exploration work, which covered multiple field seasons and included significant work on the Sundog and Sy properties, in addition to never before published exploration results on other highly prospective mineral claims in the Kivalliq Region.

The Esker/Noomut Gold Project is located in Kivalliq Region, Nunavut, on the eastern shoreline of South Henik Lake, approximately 176 km northwest of Arviat and 300 km southwest of Rankin Inlet. It is comprised of three claim blocks covering 6,227 hectares, including the 1,408-hectare, gold-mineralized Esker claim. 18 diamond drillholes have been completed at Esker for a total of 3,220 metres of drilling, including 7 completed by Comaplex Minerals Corp. in 1997 on the main Esker Gold Zone (1,319 metres), 5 completed in 2002 on behalf of Placer Dome (782 metres) and 6 in 2004 by Canadian Gold Hunter Corp. (1,119 metres).

Bill Love is a geologist who has been involved in mineral exploration in Canada for over 35 years. He was part of the discovery team for the world-class Hemlo deposit. Mr. Love was also an institutional equity salesperson in London, England for a Canadian brokerage firm and spent the last 15 years as a venture capitalist and a corporate finance specialist in a variety of resource and technology companies. Mr. Love received a Bachelor of Science (Honours) in Geology from Lakehead University in 1981 and a Masters of Business Administration from Saint Mary’s University in 1984.

Jim O’Neill has over 30 years’ experience as a finance executive with multi-national businesses operating in Canada, the USA, the UK, Turkey and Kenya. His extensive public company financial management and governance experience spans junior mining exploration, development and operations, including appointments as CFO and Corporate Secretary of Aldridge Minerals Inc. and Virtus Mining Ltd. He currently serves as CFO and Corporate Secretary of Red Pine Exploration Inc., Western Gold Exploration Ltd. and as CFO of Waseco Resources Inc. Mr. O’Neill received a Bachelor of Business Administration (Honours) from Wilfrid Laurier University in 1982 and earned his CA in 1985 with Ernst & Whinney (now KPMG).

Andrew Malim’s experience includes over 40 years in mining finance and mine development. For over a decade he served as a founding member and award-winning analyst with the James Capel & Co. mining team. In 1981, he founded the London based Lion Mining Group, a full-service mining finance and fund management business, which financed numerous notable companies and projects, including Diamond Fields Resources and the Blackdome and Snip gold mines in British Columbia. Mr. Malim has served on the boards of several Canadian publicly listed mining companies in executive and non-executive roles and has been published in various mining publications. He currently serves as Asset Director for the Asset Monetization Group.

Ashley Kirwan is a professional geologist with over 12 years’ experience in the mining industry. She was part of the advancement of exploration and production assets within the Sudbury Basin (KGHM Mining formally QuadraFNX Mining), Nunavut, Nevada, and Ecuador. Ms. Kirwan is also the co-founder, President and CEO of Orix Geoscience Inc. an award-winning geological consulting firm recognized for their technical excellence, industry partnerships, and workplace culture. In 2020, Ashley was recognized with the Young Mining Professionals’ Eira Thomas award as one of the top mining industry leaders under the age of 40. Ms. Kirwan received a Bachelor of Science (Honours) and a Master of Science in Geology from Laurentian University.

Thomas Puppendahl has over 28 years’ experience in global capital markets as a strategist, portfolio manager, investment banker and analyst. He is the founder and managing partner of Chancery Asset Management, an independent strategic advisory firm based in Singapore, specialising in precious metals and natural resources and a co-founder of a gold streaming & royalty company providing development capital to emerging gold producers. Mr. Puppendahl worked in mergers and acquisitions, private equity, emerging markets and management consulting with Merrill Lynch, Ermgassen & Co. and the Monitor Group in London and Mumbai. Mr. Puppendahl holds Master’s degrees in both Physics and Business Administration from RWTH Aachen University, Germany.

Mr. Skutezky has over 30 years’ experience in the financial sector in Canada including, Assistant General Counsel of RBC Royal Bank, where he focused on International and Canadian Project financing and Senior VP Personal Trust, National Trust Company. Mr. Skutezky has served as an officer, counsel and director of several private and public companies and has been a founder in the going public and listing of several TSX, TSX-V and CSE resource sector companies. Mr. Skutezky holds a B.A. in Business from Bishop’s University and an L.L.B. from Dalhousie Law School. He is a member of the Canadian and International Bar Associations and the Law Society of Upper Canada.