How To Avoid Investing in Rainbow Capitalism

June is Pride month, where we celebrate and support the LGBTQ+ community. ‘Tis the season for colorful flags, joyful parades — and rainbow capitalism. If you haven’t seen the rainbow capitalism memes or aren’t on TikTok, rainbow capitalism is when a company (typically a big brand name) slaps a rainbow on every product it sells during the month of June.

What’s wrong with that? Aren’t they just being supportive?

For companies that advocate for the LGBTQ+ community all year long, sure, it’s great to have the support! But for big box stores that have a history of treating their LGBTQ+ employees unfairly or that donate to politicians with anti-LGBTQ+ agendas, supporting a marginalized community for one month out of the year just isn’t going to cut it.

So, how, in a sea of rainbows, do you possibly pick out the supportive from the opportunistic? Let’s dive into just that! First, let’s discuss why rainbow capitalism is so harmful.

Why Is Rainbow Capitalism So Dangerous?

How is putting a rainbow on some merchandise so bad for the LGBTQ+ community? Well, here are just three reasons why:

It Gives Money to Corporations, Not LGBTQ+ People

Not only do many of the corporations support anti-LGBTQ+ agendas, but may they also pull customers away from small queer-owned businesses looking for support.

Plenty of LGBTQ+ businesses sell Pride merch. But if you buy the same or similar item from a large corporation, your money goes straight into their pockets instead. And many of them don’t donate proceeds of their Pride profits to LGBTQ+ communities.

It Tricks Consumers Into Believing Harmful Companies Are Allies

I’d love to believe that every company selling Pride merchandise or every company that tweets their support for the LGBTQ+ community is actually a beacon of support. Unfortunately, that’s just not the case. Instead, many companies don their rainbow hats every June to make a profit — and that’s it.

It Doesn’t Support Systematic Change for the LGBTQ+ Community

The point of Pride is queer liberation, not rainbow capitalism, but that’s become the larger discussion as the years go on. Suddenly it’s a race to see which company can be appear to be the most “supportive.”

The truth is, most major retailers don’t have LGBTQ+ people in management or as members of their boards. In fact, many companies have policies in place that actively discriminate against the community.

So, by adding rainbows and Pride merch each June, these companies get to appear like they are supporting the community, while at the same time doing nothing to advance LGBTQ+ people or causes.

Rainbow Capitalists You Should Avoid Investing In

Wells Fargo has been in the news a lot in the last few years. Between funding the Dakota Access Pipeline to the massive amounts of fraud against its customers, Wells Fargo has a long history of having a negative impact on marginalized communities.

Wells Fargo also was heavily invested in the prison industry. Members of the LGBTQ+ community are three times more likely to be incarcerated, and more likely to experience abuse in prison than non-LGBTQ+ individuals (not to mention other marginalized communities like the Black and Latinx communities). Although they have since divested from some of those investments.

It breaks my heart a little bit to say that Disney may not be the best investment. Not in terms of returns – there’s no denying Disney has done very well in that area, but because of their sordid past with the LGBTQ+ community. While they have tried to turn things around, by creating support groups for employees and adding a few LGBTQ+ characters to their movies, there is simply no denying their history.

Disney has a lot of pull in the state of Florida. After all, they give $5.8 billion to Florida revenue each year. When the notorious ‘Don’t Say Gay Bill’ was introduced in Florida, Disney remained silent until after the bill was passed. Plus, they had previously donated to lawmakers who supported the bill.

Potentially Disney’s one saving grace is the fact that they are rated highly for their inclusive LGBTQ+ workspaces. With that being said, there were employee walkouts over Disney’s silence during the ‘Don’t Say Gay’ bill, and Pixar creators have reported attempts to censor same-sex affection representation in movies.

Tesla is another example of a company that states that they’re an LGBTQ+ work-friendly space. But its founder, Elon Musk, has made many remarks in the past that completely contradict this stance. He has tweeted a cartoon that mocked gender pronouns and effectively called being gay a personal choice (it is not).

Plus, LGBTQ+ employees have, on multiple occasions, discussed the severe harassment they’ve faced at work because of their queer identities. Many of these cases have ended in major discrimination lawsuits against Tesla.

Walmart is the perfect example of a true rainbow capitalist. For starters, they sell some pretty cringe-worthy Pride merchandise: 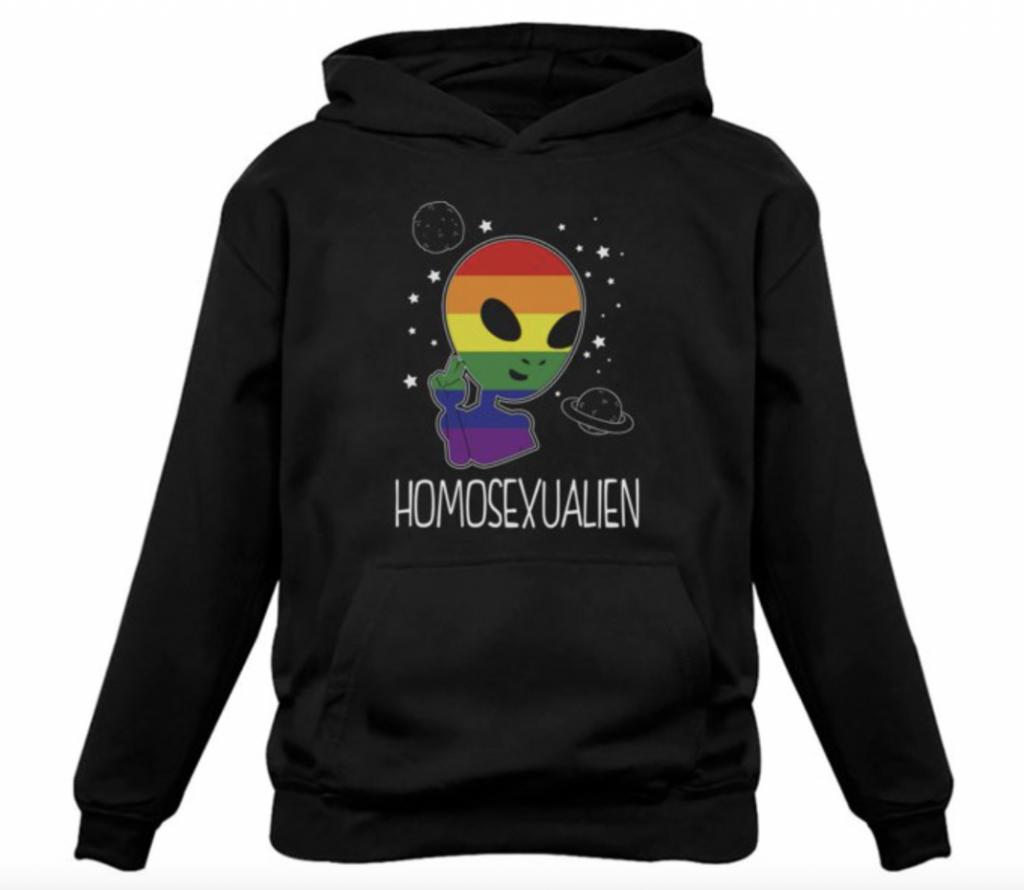 I don’t know too many LGBTQ+ folks who’d like to be referred to as “aliens.” And that’s coming from someone whose favorite show is “The X Files.”

Besides that, Walmart is one of the largest donors to major lawmakers that have been long-time advocates of anti-LGBTQ+ legislation. Additionally, Walmart has been sued for denying healthcare to spouses of LGBTQ+ employees.

LGBTQ+ Friendly Companies Worth Investing In

Thankfully, not every company subscribes to rainbow capitalist ideals. Let’s get to some of the good guys.

Every piece I’ve written for Pride month includes Ellevest, and there’s a good reason why: they are unabashedly supportive of all communities, the LGBTQ+ community included. Ellevest is an investment platform created by women and for women (although anyone can use it to invest).

If you’re looking for a company to help you pick LGBTQ+ friendly investments, Ellevest ensures that their options only include companies that have an active commitment to creating a more equal and just society. Ellevest will put a portfolio together for you that consists of up to 53% of ESG investments and impact funds, making them one of the only robo advisors dedicated to values-based investing.

Nike does its Pride branding well. For starters, it’s been partnering with LGBTQ+ athletes during Pride month for its “Be True” campaign for years. Each year, the athletes speak at Nike’s “Be True Summit” where there’s a broader discussion on how to create social change for the community. So yes, Nike sells rainbow merchandise, just like Walmart and Disney, but it does so in a way that supports the community its’ supposed to be celebrating.

Nike points out on its website that the “Be True” campaign is just part of its commitment to helping bring equality to the LGBTQ+ community. It also has the “Until We All Win” community investment program. This program offers groups (such as POC, LGBTQ+, military veterans, etc.) a total of $625,000 each to help their communities thrive. In 2022, Nike donated to 18 LGBTQ+ organizations.

Apple has been a dutiful supporter of the LGBTQ+ community, which may not be surprising considering the company is led by Tim Cook, who came out as gay back in 2014. Apple has always loudly protested against anti-LGBTQ+ policies. It led the charge against Texas Governor, Greg Abbott’s claim that gender-affirming care for trans kids is similar to child abuse.

Apple also treats their LGBTQ+ employees with the utmost respect. The Diversity Network Associations support employee groups that offer educational resources for a variety of marginalized communities. [email protected] is just one of these groups that employees can join to network and feel a sense of belonging within their workplace.

Intuit proves that financial companies can absolutely support the LGBTQ+ community — and you don’t need to sell anything branded with rainbows to do it. It’s one of the top companies for fair and equal employee benefits for LGBTQ+ workers. They have an employee-run LGBTQ+ Ally program that welcomes all employees who want to make a positive impact on the LGBTQ+ community.

Intuit also has a Pride Network group for their LGBTQ+ employees and has 300+ members, with 10 active chapters across all Intuit sites globally. And, in 2020, after hosting the first-ever Transgender Summit, Intuit has begun offering healthcare plans that cover gender-affirming (and life-saving) surgeries such as chest augmentation, electrolysis, pectoral implants, and more.

There are companies that genuinely try to support the LGBTQ+ community and choose to be a little extra festive during Pride month. At the same time, there are also even more companies who are simply looking to profit from appearing to help a marginalized community.

In reality, many companies don’t align the community-affirming lip service during Pride Month with actions that support the community. Instead, they often take part in practices that actively hurt the community; this is rainbow capitalism at its worst.

Avoiding the companies who are just looking to make some money is one way we can hopefully rid Pride of self-serving businesses and put the power back in the hands of LGBTQ+ creators and business owners.