Australia’s rental market reaches new highs, but there are signs of cooling ahead

Domain’s latest quarterly Rent Report reveals that house and unit rents across the combined capitals have reached a new record high of $515 and $460 respectively, with the country seeing its strongest annual growth in 14 years. This quarter has seen the longest stretch of continuous rental price growth on record as house rents rise for the fifth consecutive quarter and unit rents for the fourth. 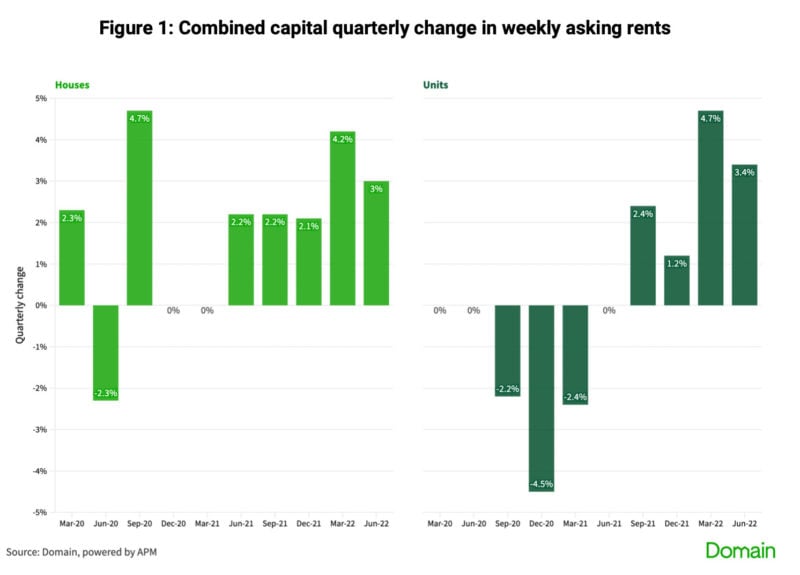 The strength of unit rent price growth over the quarter – being at a faster pace than house rents is due to the affordability pressures of renting a house shifting demand to units – a key trend of 2022, the report explains.

Dr Nicola Powell, Domain’s Chief of Economics and Research, explained that the numbers we’re seeing are a result of a combination of high property prices which are putting buyers off and forcing them to remain in the rental market for longer.

At the same time, she adds, higher home loan costs are being passed onto tenants, weaker investment activity throughout 2019-20, fewer building completions, greater household formation, investors cashing in on the recent price boom, and rental demand being boosted by the return of international students and overseas migration is also supporting record high rental prices.

But the data also shows the tide may be turning.

Domain also found that the pace of quarterly growth is easing and vacancy rates is stabilising at 1% for the fourth consecutive month in a row, giving a renewed hope to renters.

Despite the record high rent prices across the nation, Domain’s data also suggests the rental market is beginning to cool.

“While it is still a very competitive market, increased investment activity has helped to ease some pressure on tenants with national vacancy rates holding for the fourth month and the choice of rentals nudging higher over June,” Powell said.

“This, together with new first home buyer government incentives such as ‘Help to Buy’, has the potential to assist the transition of more tenants becoming homeowners, easing some of the demand pressures that the rental market is currently facing.”

Let’s delve deeper into the numbers for each state.

Meanwhile, unit rents continue to rise faster than houses, narrowing the gap between the two, after surging by 5% over the June quarter to $525 a week – the steepest annual increase in 14 years, at 11.7%.

In fact, the data shows it’s the first time in 14 years that unit rents have risen at the current annual pace and have outpaced house rents in the first half of 2022.

“Unit rents are now higher than at the start of the pandemic and they are on track to surpass the 2018 record high next quarter if they continue at the current growth rate,” Domain said in its report.

Sydney’s strong rental market continues to be supported by its record low vacancy rate of 1.4%, with the viability of rentals halving since June 2019 creating surplus demand in an already constricted market.

But, on a positive note, the report points out that increased investment activity has helped to ease some pressure on tenants with vacancy rates and the choice of rentals nudged higher over June.

“This, together with the new first home buyer incentives should assist the transition of more tenants to become homeowners, easing some of the demand pressures,” the report said.

House rent prices in Melbourne increased 2.2% over the quarter to a new record high of $460 a week.

Despite the rise, Melbourne still remains Australia’s most affordable city to rent a house and the value gap has widened as rents rise faster in other capital cities.

Meanwhile in Melbourne’s unit rental market prices surged 5.1% over the quarter to $410 a week –  the second steepest quarterly rise on record and the sharpest annual increase since 2008, at 10.8%.

Inner Melbourne unit rents led price gains after surging $45 over the quarter but they remain $45 below the March 2020 record high.

This is because the lower affordability barriers of unit rents are attractive for tenants and continue to support a price recovery.

And if Melbourne unit rents continue to rise at the current pace, they are on track to set a new record high next quarter, the report claims.

The rental recovery is being supported by the return of international students and overseas migration, affordability constraints of purchasing, weaker investment activity throughout the pandemic, greater household formation, and some investors selling.

House rental prices in Brisbane surged to a new record high of $520 a week following a 4% increase over the quarter which is the steepest annual increase on record, at 16.9%.

In Brisbane, the vacancy rate remains at an all-time low of 0.6%, halving over the past year.

The potential number of renters per listing hit a historic level over the June quarter and is 77% higher than the five-year average – highlighting the intensity of competition.

The report reveals that areas such as Strathpine, Chermside, and North Lakes have extremely low vacancy rates, and finding an empty rental is likened to locating a needle in a haystack.

Instead, Domain data shows that prospective tenants will find better odds in Inner Brisbane and Jimboomba – although still a landlords’ market, they have the city’s highest vacancy rates.

“Overall, this shows that investment activity hasn’t been able to keep pace with rising rental demand,” the report said.

“These trends are likely to continue as Queensland recorded the strongest population growth of all the states driven by interstate migration hitting a record high.” 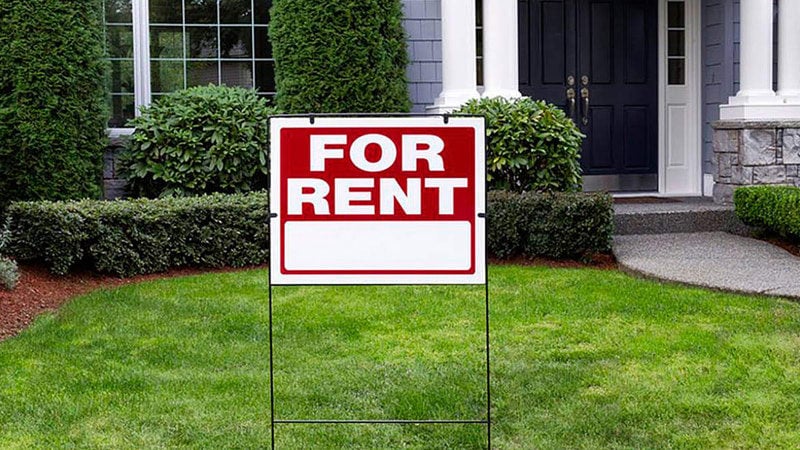 Adelaide continues to reign as the most competitive capital city to find a rental in Australia, with house rents growing at a faster pace than unit rents, bucking the overall national trend.

Whereas, house rents are at a new record high for the first time in nine years in Perth, after a 3.1% jump over the quarter to $495, which is 10% higher than last year.

Unit rents hold at the highest point in eight years at $400 a week, after increasing 5.3% annually.

Hobart’s rental growth has slowed (units are unchanged at $450 and houses rose 2.9% to $540) despite record highs, as tenants have faced multiple years of rising rents and ruthless conditions in which to find a home.

Darwin remains the highest yielding capital city for houses and units, yet unit rents have declined for the first time in two years, at 2% over the quarter to $480, and houses have remained stagnant at $600.

Darwin’s units are the only market where rental prices have actually dropped over the period. 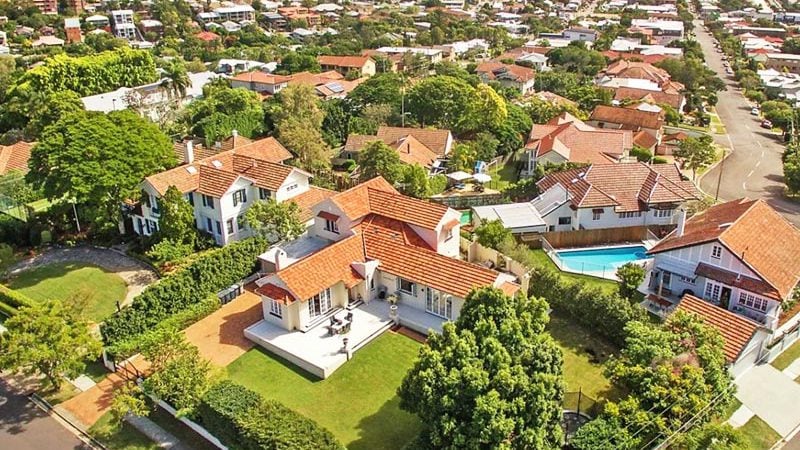 Despite rent prices hitting a new record high across Australia’s combined capitals, there are some areas that the report has identified where rent affordability has improved over the past quarter.

Unit rental prices in Birmingham Gardens in Newcastle have seen the steepest decline over the past year, dropping 22.6% to a new median weekly asking rent of $163.

Units in MacLeod in North East Victoria came in second place with a 17.2% decline in weekly asking rents to a new $240 median.

In third place, but topping the list for houses, are houses in Rossmore in South West NSW where prices have dropped 15.4% to a new $550 median.

In fact, NSW dominates the list of the top 10 suburbs where rents have become more affordable, being home to 6 out of the 10 suburbs.

Victoria is home to two suburbs on the list, while one Western Australian and one South Australian suburb also made the list. 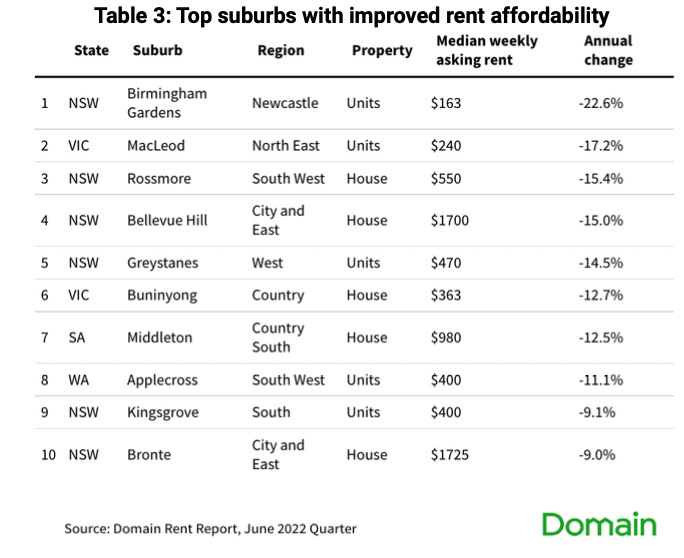