It’s no secret that lithium-ion batteries power the modern world, and all signs point to them being an absolute necessity for future technology. The global market for lithium-ion batteries is anticipated to register a CAGR of 20.1 percent between 2021-2026, resulting in a market size of US$168 billion in 2026, a substantial increase from US$46.8 billion in 2019. The stationary energy storage market is expected to drive the market growth, with applications reaching across many industries, from telecoms to solar power generation systems. Lithium-ion batteries are so important to the future that US President Biden issued an executive order declaring a list of metals that are critical to the United States, signaling the vital importance of these metals.

American Manganese Inc. (TSXV:AMY,OTCQB:AMYZF,FSE:2AM) is a technology and critical metals-driven company that is focused on advanced lithium-ion battery upcycling. The company owns two patents (US Patent No. 10,246,343 and US Patent No. 10,308,523) that power its innovative upcycling process. It also owns patents for this process in Japan and Korea. This closed-loop process takes battery manufacturing waste and end-of-life batteries and upcycles them into a high-value cathode precursor material. The company also has three mining projects located in the United States and Canada.

RecycLiCo is the company’s flagship project and a clear indicator of the renewed direction of the company. While American Manganese began as a mining company, they’ve since pivoted to developing and commercializing its patented upcycling process. The process is focused on “black mass” a dark substance that’s created by mechanical size reduction of end-of-life batteries and battery production wastes. Black mass is used in the RecycLiCo process to recover 99 percent of lithium, cobalt, nickel and manganese, which is astounding compared to the alternative which recovers no lithium and only 40-60 percent of nickel and cobalt. 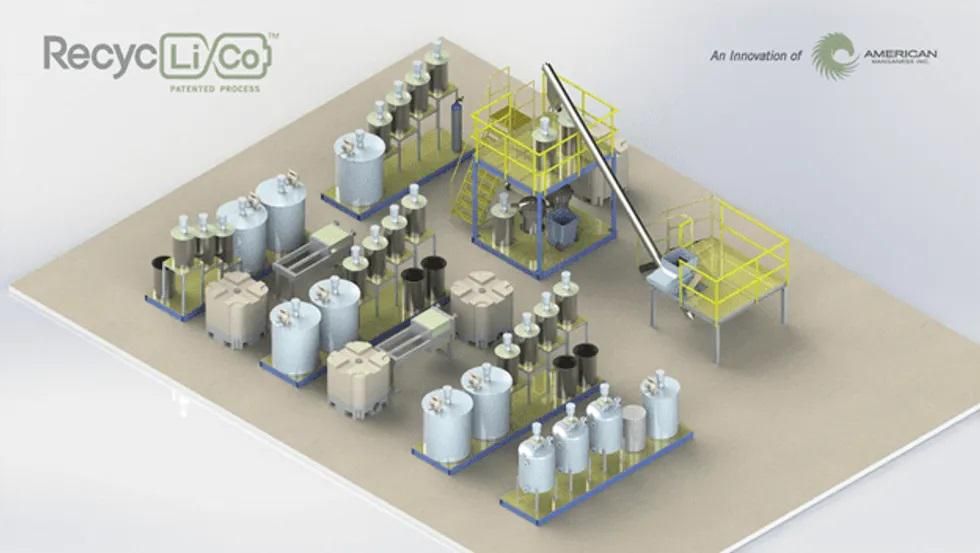 “Generally, you can mechanically break down a battery into its individual components but we differentiate [between recycling and upcycling] by creating a higher-value product. That’s exactly what we’re doing with the production of the cathode precursor. We highlight the importance of reducing the amount of steps and going directly into a higher-value product,” said Zarko Meseldzija, chief technology officer, in a recent interview.

The current roadmap for the RecycLiCo process is to grow the project from a pilot plant and R&D into a demonstration plant. The company has committed $2.7 million towards the construction and testing of its demonstration plant which plans to further de-risk the process scale-up. Assuming the success of a demonstration plant, the next step is to create a commercial plant, which will cost an estimated $15-20 million. At this time, the company will explore licensing and joint development partnerships to further expand. In October 2021, American Manganese closed a $20 million financing with institutional investors to go towards its road to commercialization.

RecycLiCo is a patented process for the upcycling of lithium-ion battery black mass and scrap materials. Black mass is created by mechanical size reduction of end-of-life lithium-ion batteries that contains valuable and critical materials such as lithium, nickel, manganese, and cobalt.

The RecycLiCo process extracts over 99% of lithium, cobalt, nickel and manganese from lithium-ion battery cathode materials. It is planned to directly integrate the upcycled materials into the re-manufacturing of lithium-ion batteries in gigafactories located around the world.

The existing alternative to RecycLiCo’s process is smelting. This process generates 2 tonnes of CO2 per tonne of metal, making it environmentally unsound. From a strictly financial perspective, smelting only recovers about 40-60% of the nickel and cobalt in lithium-ion batteries and does not recover any lithium. There are also specific additional steps and further refining that must take place before a usable product is created.

The RecycLiCo process is patented in the United States, Japan and Korea. American Manganese has already proven that their process works in a pilot plant. The next phase of the operation is to build a demonstration plant with a 500 kilogram/day capacity of lithium-ion battery cathode scrap material. Once this demonstration plant has fully illustrated the economic feasibility of the process, the next step is to develop a commercial plant capable of processing 5 tonnes/day.

In October 2020, the United States Defense Logistics Agency (DLA) awarded American Manganese a grant to perform lab-scale work on the United States Government’s manganese ore stockpile located near Wenden, Arizona, with the goal of confirming the viability of using the Company’s patented hydrometallurgical process to produce electrolytic manganese metal (EMM) from the stockpile.

Manganese is listed by the U.S. Government as a critical mineral, one of 14 minerals or metals for which the U.S. is 100% import dependent. EMM is on the acquisition list for the U.S. National Defense Stockpile. The global manganese market is greater than 41 billion pounds per year, with manganese the world’s fourth most-traded metal. There is no substitute for manganese in the production of steel.

Larry Reaugh has 55+ years’ experience in the mining industry and for the past thirty-seven years he has been the CEO and President of several exploration, development and production companies including 12 years in internet and technology breakthroughs listed on the TSX, TSX Venture and NASDAQ exchanges. Several of his companies have made significant discoveries, three of which (gold/silver) went on to be producing mines. Reaugh founded American Manganese Inc. in 1998 and has served as its President and CEO since that time. Through his career, Mr. Reaugh has raised in excess of $300 million.

Zarko Meseldzija has a range of industry experience working with one of Canada’s largest energy companies and an innovation-driven process systems company. Meseldzija has deep insight into project management of multi-million-dollar projects and hydrometallurgical process development projects. He is also an owner of an independent consulting firm that focuses on the entire life cycle of the lithium-ion battery supply chain, including the recycling of critical materials. Meseldzija holds a BSc. in Mining Engineering from the University of Alberta and is a registered engineer with the Engineers and Geoscientists of British Columbia. He obtained his Management of Technology MBA from the Beedie School of Business with a focus on sustainability and innovation.

Teresa Piorun has been with the Reaugh Group of Companies for thirty years. Piorun is a senior corporate officer with wide-ranging responsibilities, serving as a focal point for communication with the board of directors, senior management and the company’s shareholders, and occupies a key role in the administration of critical corporate matters. She is the confidant and advisor to the CEO and other members of senior management, particularly on corporate governance affairs.

Dr. Hildebrand has been a practicing lawyer in British Columbia for over 40 years and has a doctorate in economics in addition to his law degree and Master of Science degree in mathematics. He was previously a director of AMY from 2007 to 2013.

PrevPreviousDear Debbie: I Feel Disconnected and Directionless—What Should I Do?
Next64.2% Of Sites Use WordPressNext